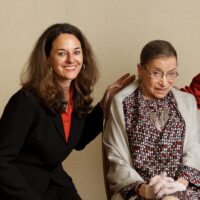 Ruth Bader Ginsberg, affectionately known by her fans as “RBG”, was a pillar in the legal community for many reasons.  She was a bright student graduating high school at 15 years of age.  Ruth Bader Ginsberg was married after graduating Cornell and was employed by the Social Security Administration only to be demoted after she became pregnant.  RBG became a lawyer at a time when there were very few female lawyers. Despite the fact that she graduated at the top of her class, she was unable to find a job based on her gender. She taught at Rutgers Law School as one of few female professors and possibly because she could not get a job with a law firm.  At the time, there were less than 20 female law professors in the country. She taught at Columbia Law School from 1972 to 1980 and was the first tenured female professor at Columbia.

In 1972, Justice Ginsberg co-founded the Women’s Rights Project at the American Civil Liberties Union (ACLU) participating in gender discrimination cases. As a skilled litigator and strategist, RBG was selective when she chose cases in her quest to end gender discrimination.  Her clients also included male plaintiffs demonstrating that discrimination spanned both genders.

One of her most famous cases was Craig v. Borden, whereby an Oklahoma statute had different minimum drinking ages for men and women. RBG’s last case before the Supreme Court was Duren v. Missouri, which she challenged the validity of voluntary or optional jury duty for women.

Justice Ginsberg was appointed to the U.S. Court of Appeals for the District of Columbia in 1980 before she was appointed to the Supreme Court by President Clinton.  Ruth Bader Ginsberg was known for her dissents whereby she did not shy away from giving her opinion.  She felt that major changes needed to come from Congress and other legislatures, not the Supreme Court.

Justice Ginsberg, similar to Cal Ripken, Jr., had not missed a day of oral argument even during chemotherapy or the day after her Husband, and true love, passed away. Legal scholars credit Justice Ginsberg for making significant advancements for woman under the Equal Protection Clause of the Constitution.  As seen by the outpour of accolades and memorials upon her death, RBG will be remembered in history as an advocate for gender equality and women’s rights.  She broke many glass ceilings for women and was ultimately and affectionately known as “Notorious RBG”.